A few years ago, when I became scrum master of one of Raet’s development teams, I took it on as a challenge. Right now, my team mates, that I truly cherish, see me not only as scrum master, but also as team lead. This has sort of grown over time, yet it surfaced during an open discussion a while back. That view of me being a leader got me thinking about the term leadership; What is leadership? What are the characteristics of a good leader? How does one lead a team? This is what I learned so far…

From my experience so far, and my vision a leader should provide guidance and care for the team.

Loads of books have been written about leadership; there are books that truly focus on coaching software development teams, and other about coaching in general, usually applicable for sports teams. I’ve since then read a few books on leadership, and found a few quite interesting.

The authoritarian style of leadership requires clearly defined tasks and monitoring their execution and results. The decision-making responsibility rests with the executive. In contrast to the autocratic, the practice of a participative leadership style involves employees in decision-making. More extensive tasks are delegated. The employees influence and responsibility increases.

This is what Wikipedia actually has to say about servant leadership and leadership styles, most applicable to a scrum master. The example shows more of a manager-employee-role difference, yet within a scrum team developers can look in the same way to a scrum master. The scrum master should then not make the decision on his/her own, yet guide the team in making the right decision, placing the decision in the team’s hands. It depends on the maturity of the team how much guidance is needed.

I have seen many examples over the course of my few years that decisions are actually made by executives or managers, not actually made by the people that have to work with it every day and have the knowledge to make a sound decision. I have to mention that I have also seen quite a few good examples where the decision making is placed in the right place.

David Marquet, a former submarine commander, wrote the book “Turn the ship around!” in which he introduces the leader-leader model, as an improvement over the regular top-down approach in hierarchical structures, that he describes as leader-follower. Marquet focuses on moving the decision making towards the right authorities, instead of the captain calling the orders, the lower-ranking officers and personnel are acting upon own intentions and own judgement.

“When the performance of a unit goes down after an officer leaves, it is taken as a sign that he was a good leader, not that he was ineffective in training his people properly.”

This quote is one of my personal points of interest in this book, you shouldn’t be the superstar of the team as leader, trying to solve everything by yourself. Delegation and letting other team members learn are two key traits of a leader. One of my weaknesses I am aware of is that I try to solve things for a team member, not letting the team member learn from their mistake. 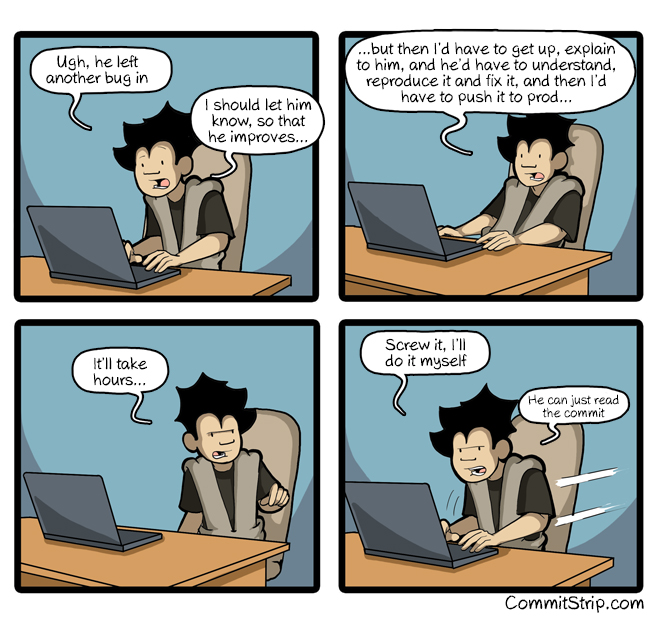 What are the characteristics of a good leader?

In the book “Radical candor” Kim Scott mentions that a good leader should always care personally and challenge directly of the team members. The crux here is to actually care about a person and show that, once that person knows it you can be very direct in a good way. Do remember that it takes time to build up that trust-bond with someone. If you don’t care, and the other person can always tell, the feedback you give can be obnoxious (in Kim’s model obnoxious aggression). The worst is actually manipulative insincerity:

People give praise and criticism that is manipulatively insincere when they are too focused on being liked or think they can gain some sort of political advantage by being fake – or when they are just too tired to care or argue any more.

For me the key takeaway from the book was the following sentence: “Be humble, helpful, offer guidance in person and immediately, praise in public, criticize in private, and don’t personalize.” Specifically focused on giving guidance immediately, don’t let feedback linger a few days, but finding a suitable moment in private (if it is some criticism on the person’s behaviour) to give the feedback. If it is positive feedback, praise it directly.

How does one lead a team as scrum master?

The Scrum.org description of the scrum master role is as follows: