“If it would be easy, it wouldn’t be an adventure”; with those words in my mind along the road while being in Iceland I pushed myself to keep on going on bad roads, or with strong headwinds.

This is the first part of a four-part series blogposts of my recumbent bike tour on Iceland, each post depicting a part of my three-week tour. In the next few months you can expect the other three posts to be published. 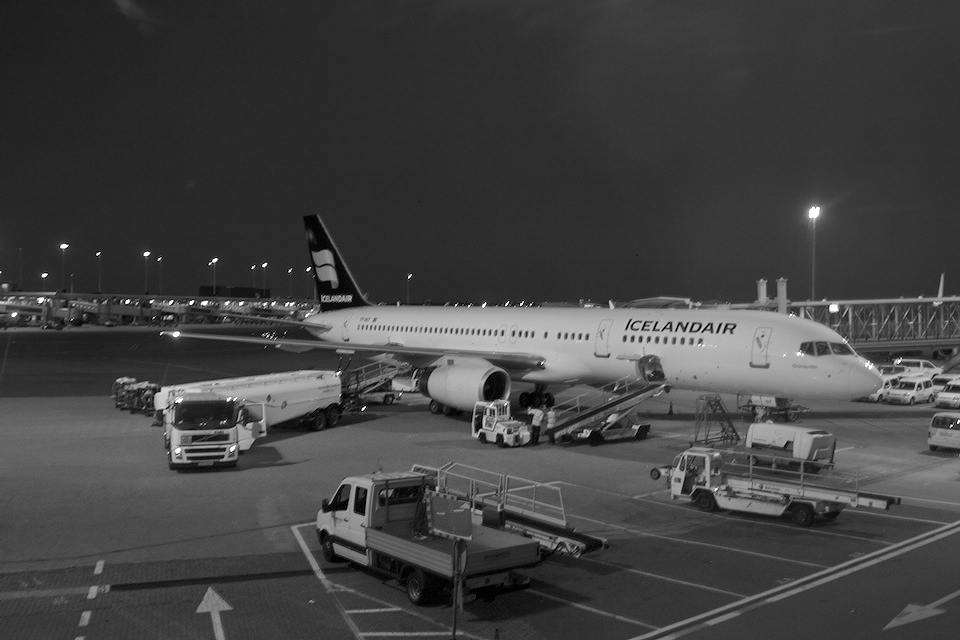 Icelandair plane waiting to be loaded near the gate at Schiphol.

Iceland, a country that isn’t on everybody’s mind to spend a summer holiday, let alone to do a recumbent bike tour on this island. Now that I am back home again for just over a week already, it is time to reflect and start to share my adventures ;-).

Arriving in Iceland in the middle of the night was quite an experience, as once outside the airport you nearly got blown sideways due to a strong cross-wind and quite a bit of rain. And I do have to set up my tent in this weather?! Though that was a worry for later, as I had to find my shuttle bus for transport to campsite Alex. Based on some advice I got and own research, this campsite offers cyclists a place to store their bike boxes for free, as long as you stay the first and last night on this campsite. Nice offer, and when you include the fact that they offer a shuttle bus that picks you up from the airport, not having to walk the few kilometres to the campsite with all your luggage, it is a great starting point for a bike tour on Iceland.

No, the weather has not died down in the few minutes driving from the airport, and so I had to set up my tent in the rain and wind. Didn’t really sleep that well that night, as I had to get accustomed to the tent flapping about in the wind. Unfortunately for me, the next morning the weather was still the same, rain and wind … thankfully the storage shed to re-assemble my bike was dry. What amazed me in the storage shed was that there were loads of bike boxes, all of people that were cycling on Iceland at that time; must have been about a hundred boxes.

Still a bit uncomfortable to be on the bike again, packed with just over 25kg of luggage, to be here in Iceland on one of the busiest roads between the airport and Reykjavik. The pelting of the rain didn’t stop until I reached the first outskirts of the towns surrounding Reykjavik, where I also decided to leave the shoulderless roads and find the unlogical cycling paths and walkways. Eventually these unlogical paths across town parks lead me to walkways that finally started to lead into the city, and found a traffic sign designating a campsite. Warm showers … bliss!

Weather had improved the next day, and with a little help from the girl at the campsite reception I found a way out of Reykjavik towards Þingvellir. Too bad the wind hadn’t died down, and of course it was a direct headwind, so it took me quite a long time to ride the 60km to Þingvellir. 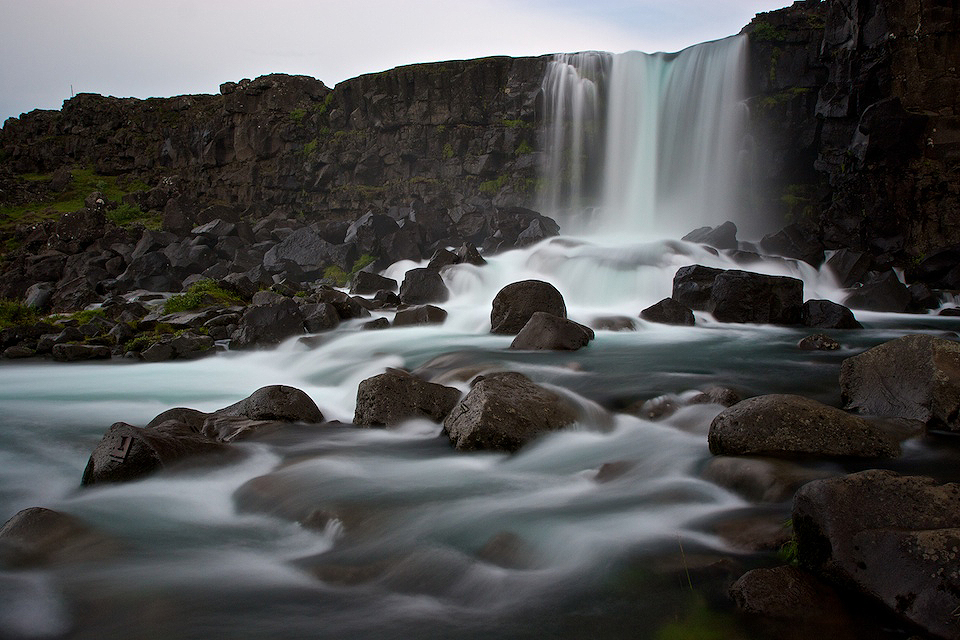 One advantage I discovered riding from Þingvellir over the 365 was that it had been paved quite recently, as I had heard that this road may still be gravel. With a good tailwind it could have been a really decent and fast flowy ride, as it would also be in a car, yet I of course had a headwind.

From Laugarvatn to Geysir the road was quite busy, packed with buses, jeeps, campervans and the occasional cyclist. This stretch of road is part of the ‘golden circle’ route from Reykjavik, visiting the main tourist attractions in south-west Iceland (Þingvellir, Geysir, and Gullfoss). I know, I’m also visiting those places; though not experiencing the landscape and weather from inside a big bus :).

The campsite at Geysir was easily found, basically the first exit of the main road once you enter the village. Well, village? From what I’ve seen it’s not much more than a hotel, campground, a swimming pool and some farm houses all quite close to the main road and the Strokkur geyser. There used to be an even larger geyser called Geysir, south of the road, after which the other erupting springs in the world were named [Wiki: geyser]. Though currently only Strokkur is erupting, about every 6 minutes, reaching heights of up to 25m.

Tip: visit Strokkur in the evening, just before sunset; there will be less tourists as the bus tours have seized their daily activities by then, and the light will be so much better. 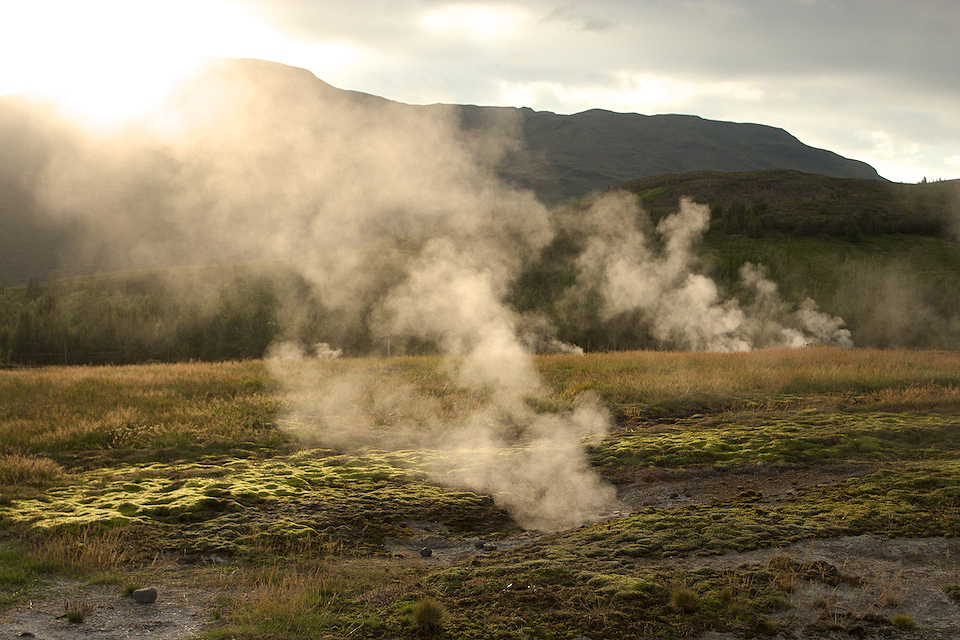 Steam coming from the ground, can’t be good if you fall in. 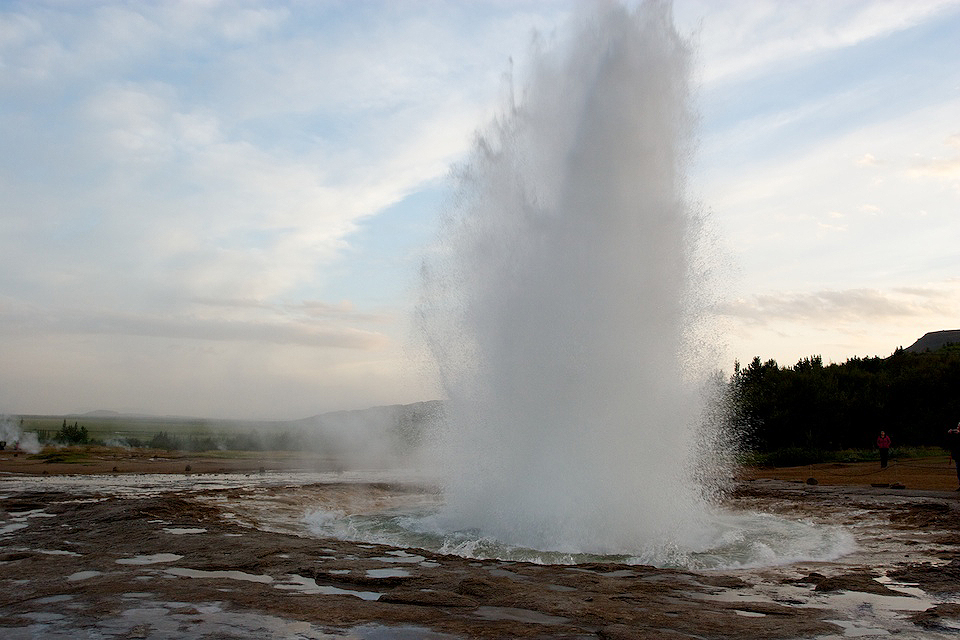 Impressive to be so close to the Strokkur geiser

About 10km further north from Geysir is Gullfoss, the golden waterfall, also packed with tourists. OK, it indeed is a beautiful waterfall, yet at the time I was there the light really wasn’t cooperating. Will definitely have to re-visit that waterfall on a return-trip to Iceland. 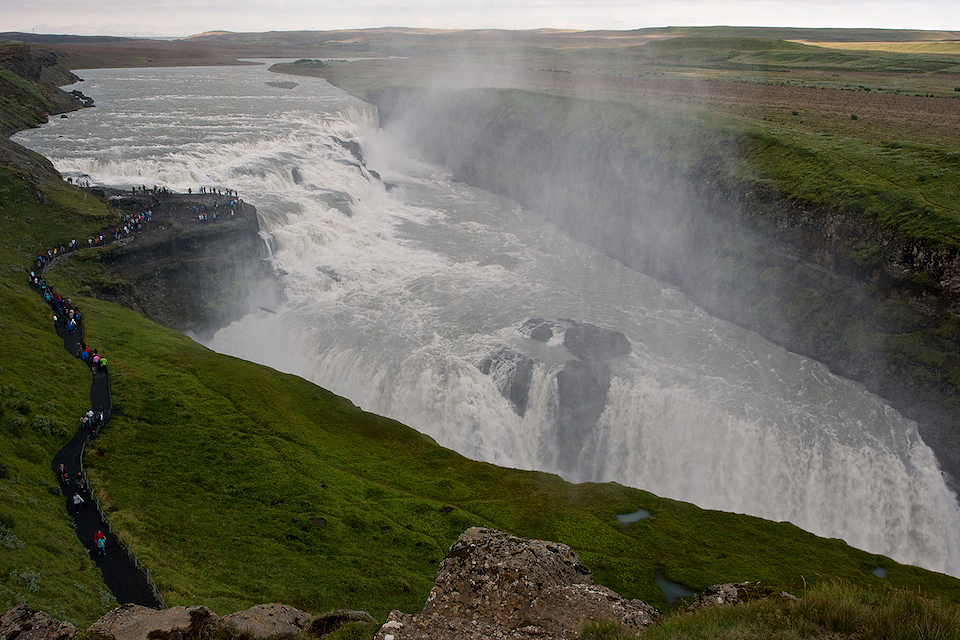 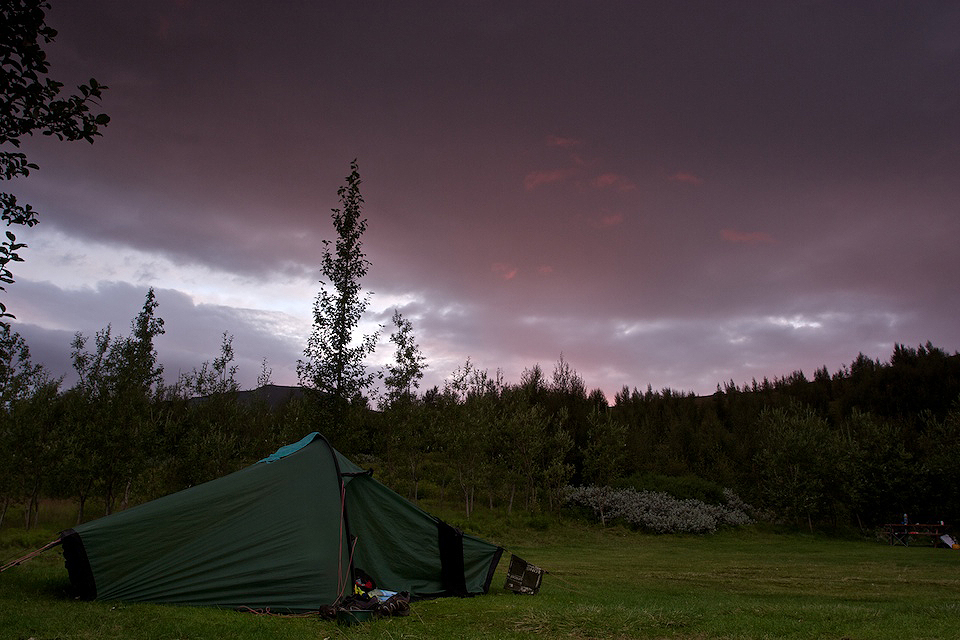 Impressive clouds at Geysir campsite just before nightfall, it was almost time to climb into my warm sleeping bag.

Weather had improved significantly the next morning, no more rain and little wind, though still quite some cloud cover. Said goodbye to a Dutch couple that I met the day before on the campsite, and set off to ride in the direction of Landmannalaugar. I knew I had to ride at least two days, before I could pitch my tent over there and experience the Icelandic highlands.

My first few kilometres on a gravel road ended not really good for my bike, as when I rolled of I could no longer shift gears; fortunately there was no severe damage, only the Rohloff external gearbox linking the shifter on the handlebar to the hub had come loose. Simply fixed within 30 seconds … pfew!

It was now becoming clear that the landscape is changing, from the rolling fields near Þingvellir to more rugged and rocky landscape in this area. The F208 leading from the north to Landmannalaugar was quite challenging on my recumbent, though only had to push my bike once at the start of the trail. Quite a steep incline on ash and gravel is not a combination that I could handle on my bike, the back wheel kept slipping whenever I pushed my pedals.  Once this hill at the start of the F208 had been conquered the trail was quite a lot of fun, and I kept seeing smiles from the mountain rescue services passing me by on the trail multiple times. The 40 kilometres I had to do were not easy going, and they took quite an effort .. however, it was well worth the views in this inhospitable place, the Icelandic highlands. 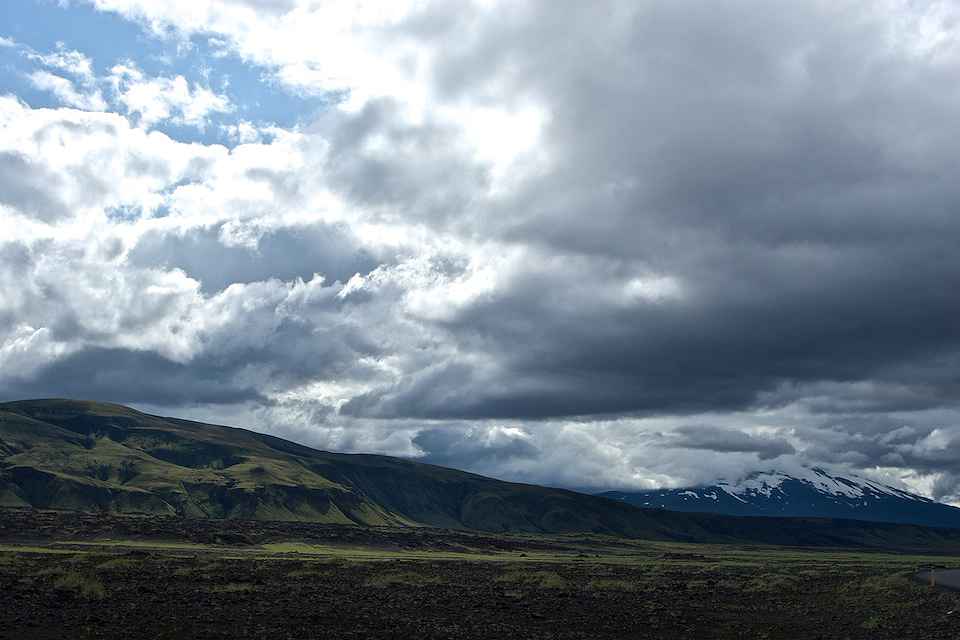 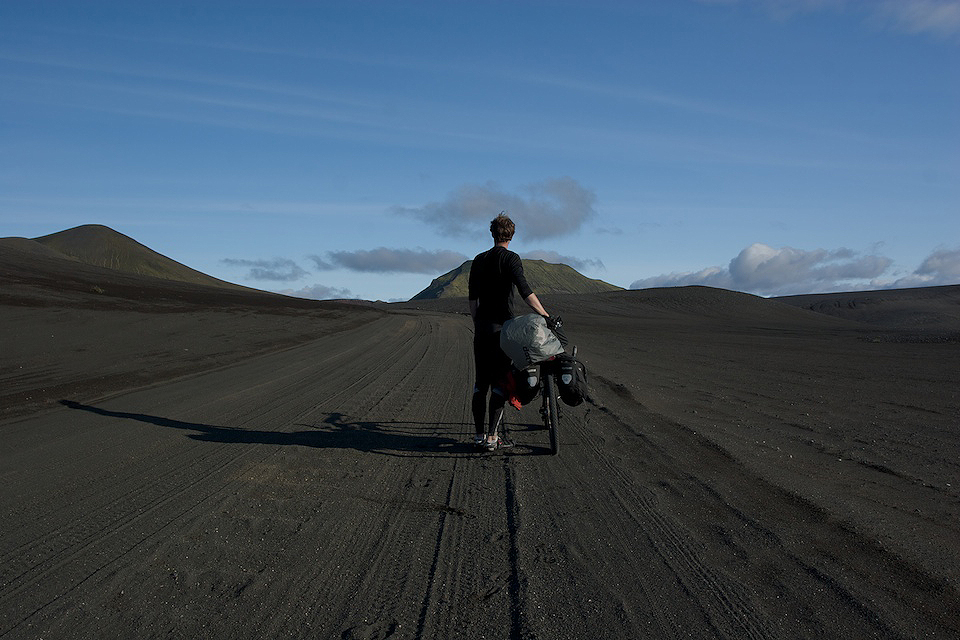 Northern section of the F208 on my way to Landmannalaugar; a trail running over ash and rocks. (1/2) 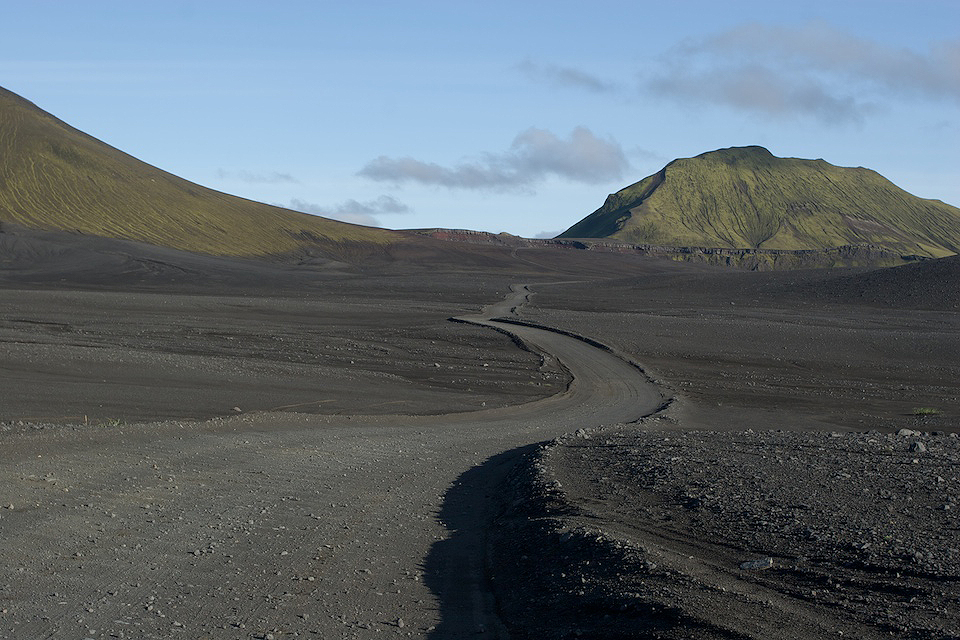 Northern section of the F208 on my way to Landmannalaugar; a trail running over ash and rocks. (2/2)

Late in the evening I arrived at Landmannalaugar, where I found quite a lot of 4×4 vehicles parked on the border of the campsite and a load of small tents within. With an easy pasta meal I decided to kick my feet up, and headed for the natural hot pool. Where I stayed for quite some time…. only to do it again the next evening. 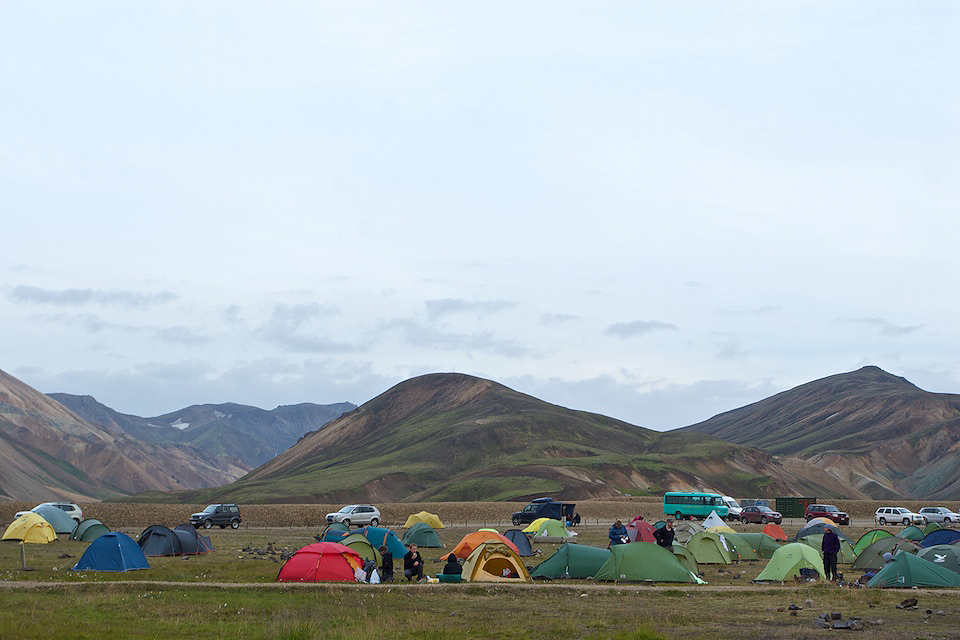 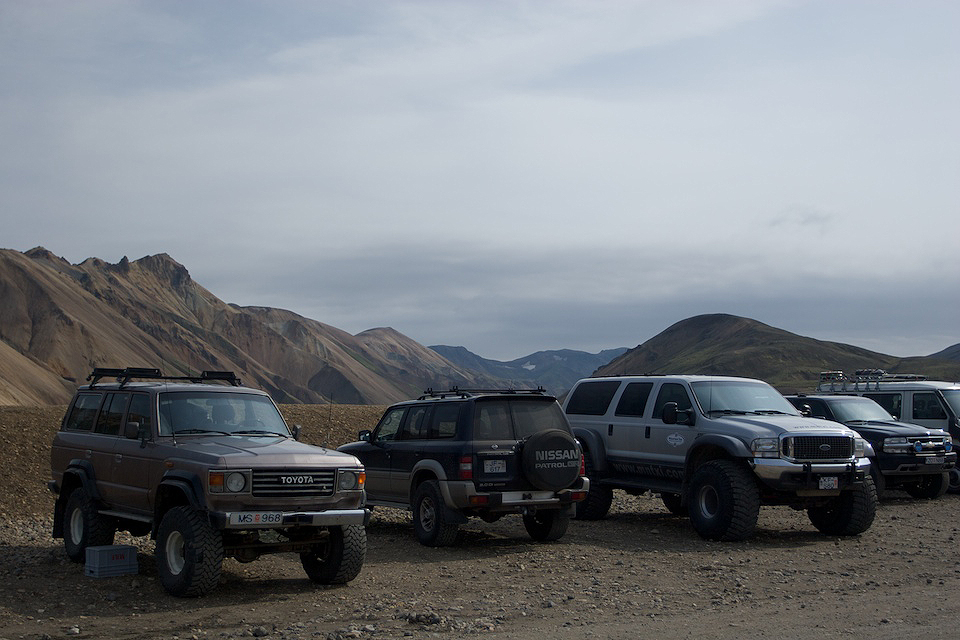 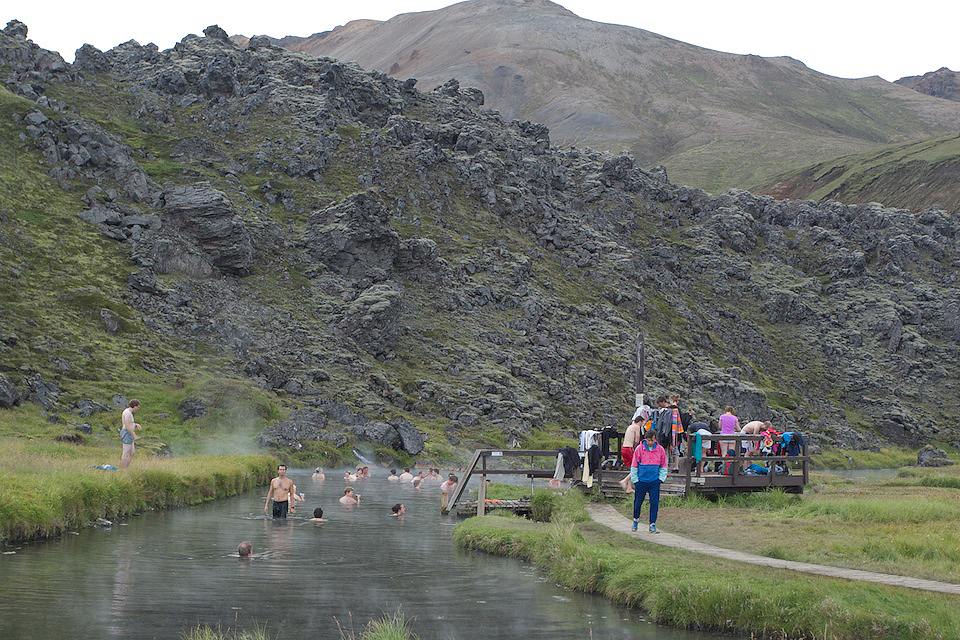 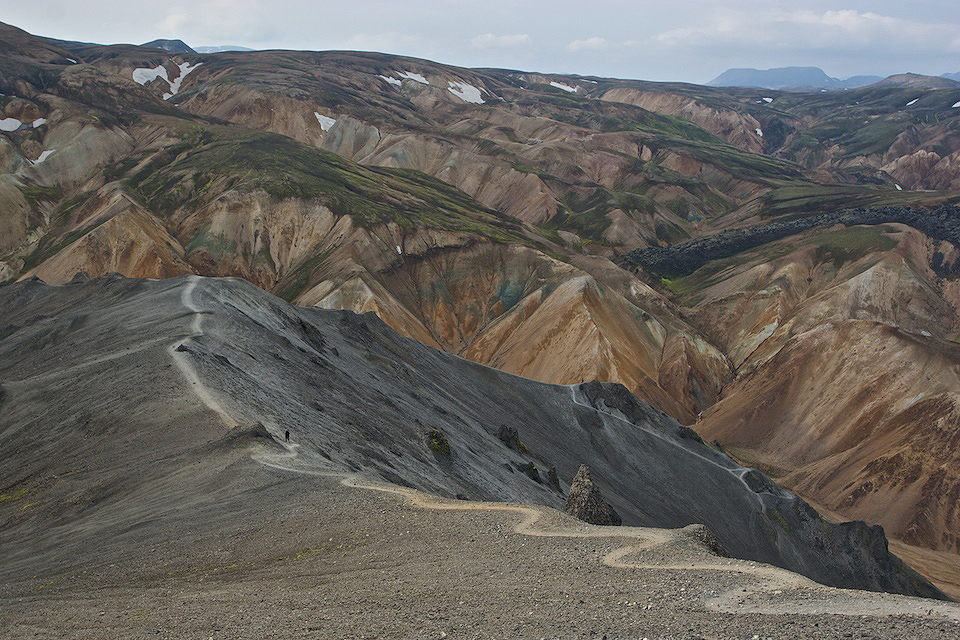 To be continued … Part two of this series will be published in one to two weeks. Hope you enjoyed it so far 😉