Welcome back again to this blogpost series on my recumbent bike trip across the Southern part of Iceland, or when you haven’t read the first part, please follow this link to read it.

I’d like to start this story in Landmannalaugar, where I stayed for two nights to give my legs a rest after now cycling for about a week. OK, as I cannot really sit still I decided to head out for a day of hiking in the area. Packed with just a camera, tripod and some other essentials to get me through the day I set off, following the path over the solidified lava field. It was astonishing to see the mirror-like rocks, combined with the more earthy colours of the mountains surrounding this field. For some reason I even found a field filled with, what seemed to be, cotton plants; this for me formed a nice view of the mountains, as you can see below. 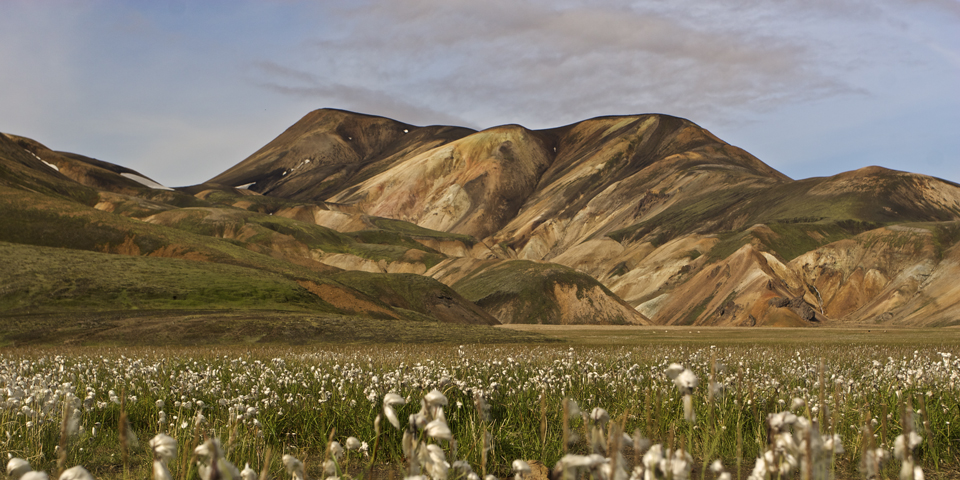 Although the lava has solidified quite a long time ago, and the area is peaceful, it does not mean that below the surface nothing is happening at this moment. This is quite clear due to the hot pool at the campsite, where the water is heated from a source under the solid lava rocks, and from a small area just outside the lava field that spills small clouds of gasses. It is said that Iceland has some of the most active volcano areas on the northern hemisphere, and it did prove that in 2010 and 2011 with the eruption of a few volcanos on the south coast. 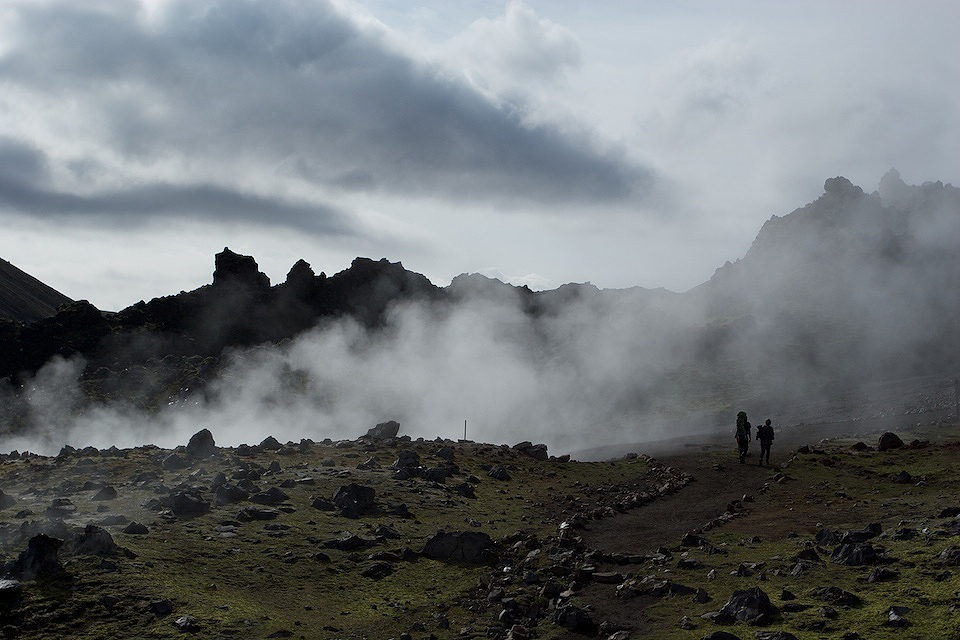 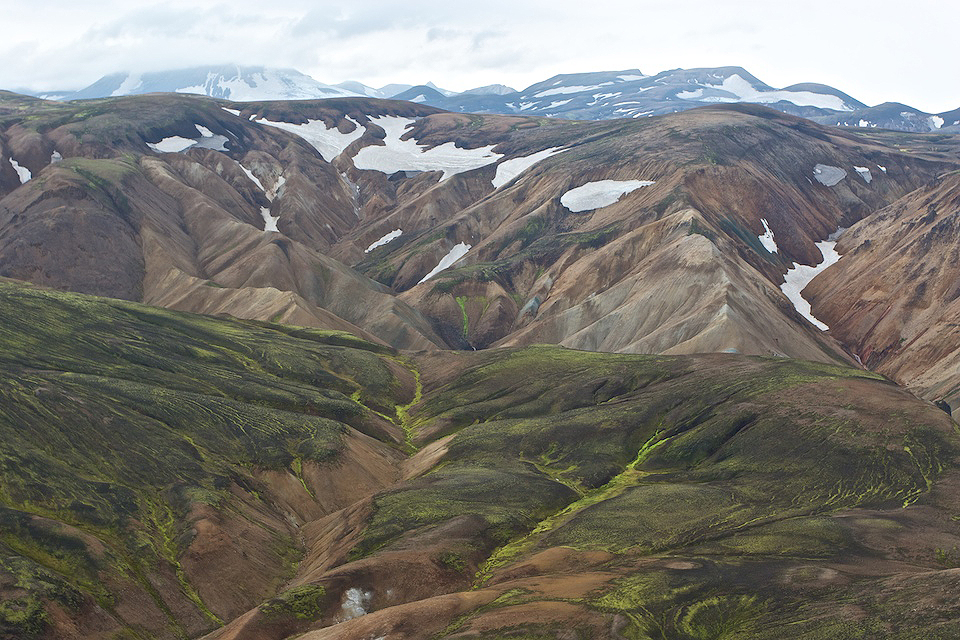 Apparently I was pretty lucky when I was in the region of Landmannalaugar, as the weather was perfectly clear for the entire day; allowing me to appreciate the view from the mountain Bláhnúkur (943m). From this high vantage point it was really spectacular to view the whole region; from some snowcapped mountains, to the run outs of molten glaciers, leaving wide scars in the landscape. The contrast between the earthy colours, the green moss and some patches of snow are ingredients for a recipe of magic views. The climb up, actually more a scramble up, took some effort, as it was quite steep, but the views from the top were worth it.

Spent quite some time just sitting on the summit, and appreciating the views, though it got pretty chilly when the some cloud cover rolled in. Yeah, I should have brought some additional layers with me on the hike, but I left them at the campsite as the weather was good. Forgot the golden rule of hiking in the mountains, always bring additional warm layers with you.

Getting down the hill was considerable easier, and being on the lay side of the mountain, also a fair bit warmer due to the lack of wind. And getting back at the Landmannalaugar campsite I discovered that there were quite a few tourist buses on the parking lot. Not the kind I had considered to be there, although similar buses had passed me the day before on the F208.

The campsite at Landmannalaugar also has a small ‘mountain mall’, where two old buses have been converted into a small shelter and a shop where you can get coffee and some basic (expensive) supplies; this is also where I met a few other cyclists and spent a while talking with them. It really is a small world, as later that day I met another cyclist from Netherlands, at first didn’t recognise him and took me a few seconds to realise I knew him, a member of the same kayaking club back home. What a coincidence! As it was already after dinner and he was in the hot pool, I decided to jump in as well and we spent the rest of the evening talking in the warm water. 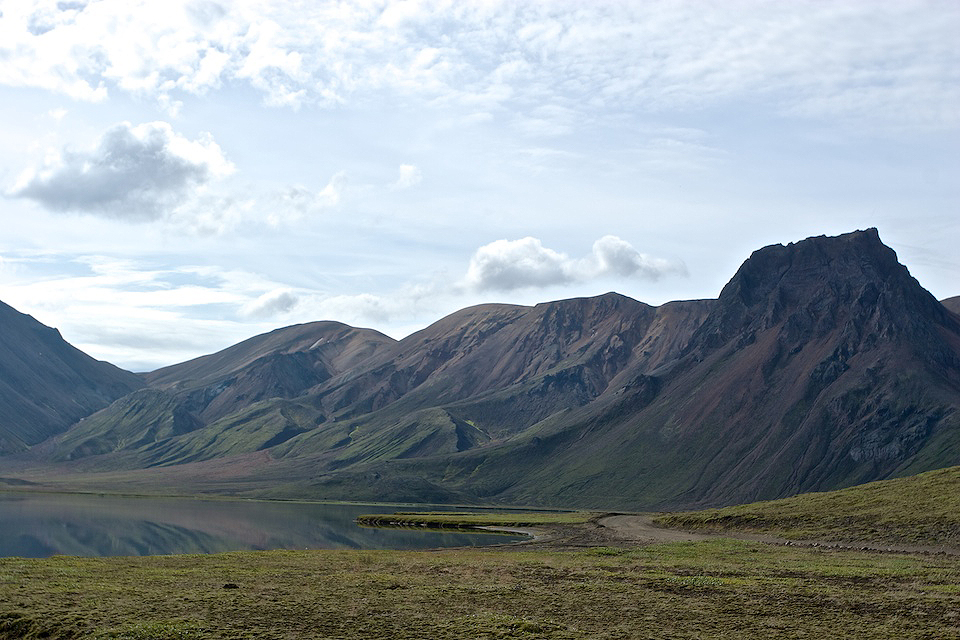 The F208 leads past a lake, some mountains and through various streams. 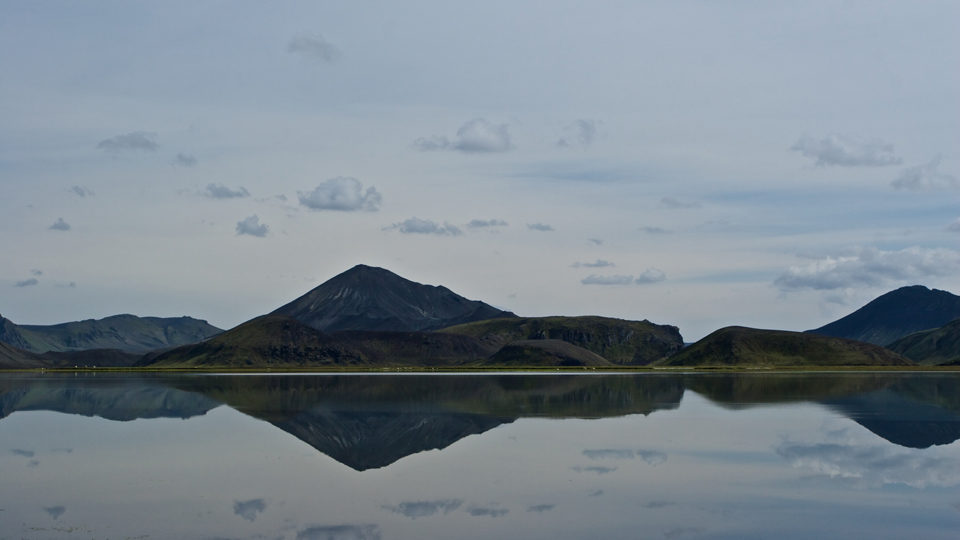 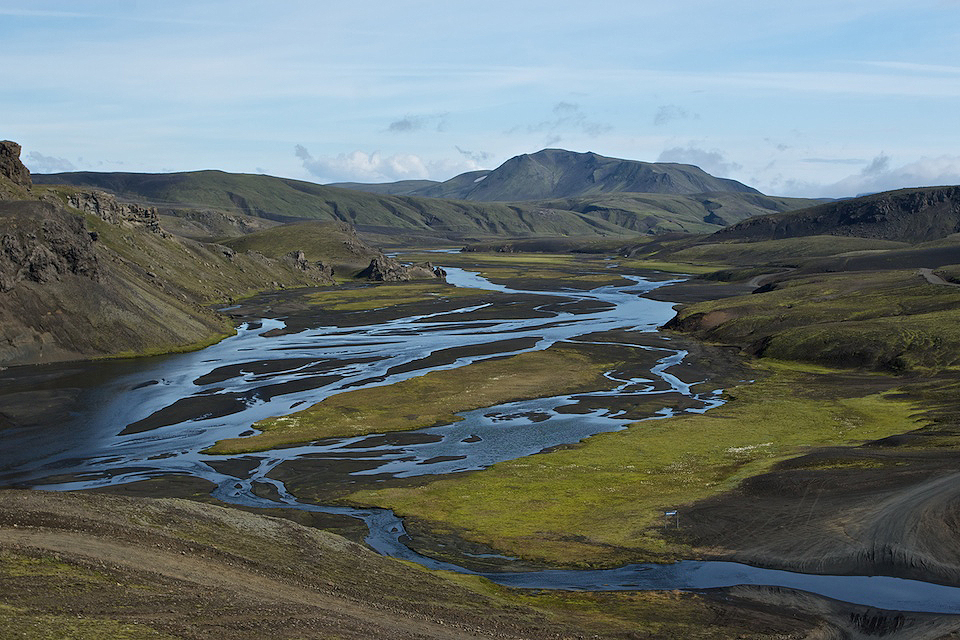 Waking up the next day was pretty lazy, yet also pretty excited as I absolutely didn’t know what the conditions of the F208 from Landmannalaugar to the ring road down south were. I knew that I had to cross a few streams, maybe a few actual rivers, but that was about it.

I stopped counting the number of stream crossings (or fords) after 4-5 times, as there were numerous smaller streams that had to be forded, as well as a few large ones. As a cyclist I was not following some existing tracks made by jeeps, as the majority of them were going through the deepest part of the streams. With every crossing I tried to find a narrow, yet shallow place to cross, that was usually just a few meters upstream of the place where jeeps and SUVs crossed. Some were easy to cross by simply riding through the water, others I walked my bike across; also quite a few where I thought I could ride across, but somewhere in the middle got stuck and had to put my feet down in the cold water to keep balance, and walk out. Good thing the sun was still out, and took my time to get my feet dry again.

The photo below was taken at the last crossing on the F208, where I was met by a German couple that gently had driven their big SUV through the stream. When they noticed me, they offered to take my photo while I was crossing the stream. Although I do not remember your names, thank you! 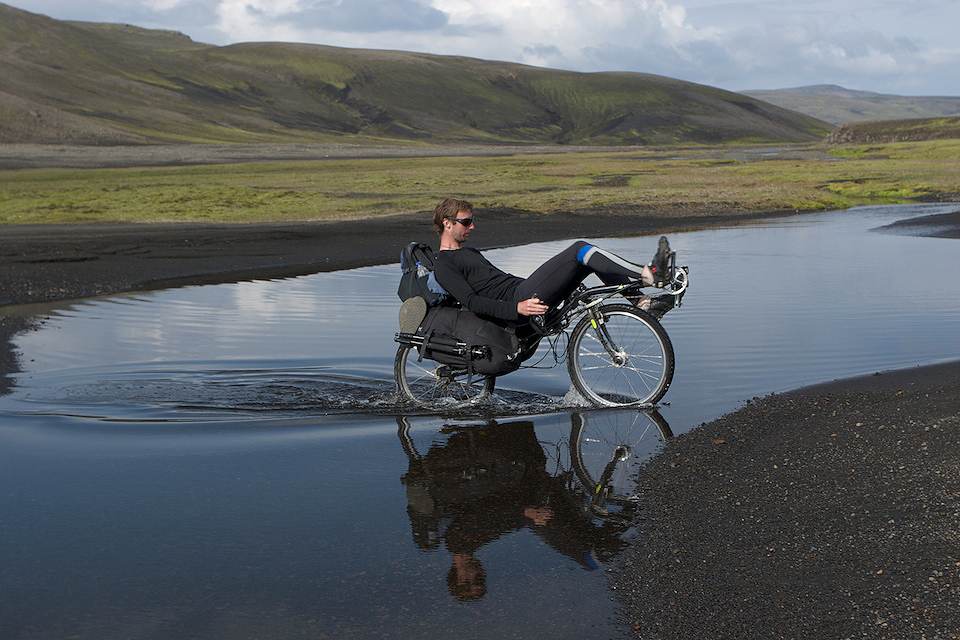 Spent the whole day to ride and walk across this 42km long section of the F208, and was in need of food and a shower; only to find a shower at the really basic Hólaskjól campsite. This really allowed me to be refreshed for the next 20-odd kilometres on the F208, until I reached a tarmac road again. Didn’t know that was so nice to ride on … but have to say that the ring road is can be quite boring for some stretches on a bike.

Don’t get me wrong, the views are quite spectacular, but on a bike you travel quite a bit slower than by car or motorbike and views remain the same for quite some distances. Could even see traffic coming from a long distance ahead, already was missing the challenging F208. At around 2:30pm I arrived in the small town of Kirkjubæjarklaustur, and after a small break at the local tourist info decided to push on to Skaftafell (another 70km).

Although the weather had been cooperating so far, just 20km west of Kirkjubæjarklaustur the wind started to fall off the big cliffs left of the road. Leaving me battling against the sudden gushes of wind coming from practically all directions, though no tailwind.

About 30 kilometres before Skaftafell the mountains gave way to plains, the result of retracting glaciers over the years and sub-glacier volcanic eruptions. As the wind was blowing straight across the road there was a risk of dust storms, and I could see on dark clouds of dust quite a few meters high moving on both sides of the road. Had been warned earlier that I should not be caught inside these dust storms, as with really high wind speeds the dust could strip the paint of a moving car. Wouldn’t want to find out what it does with a cyclist then.. a buff and a pair of sunglasses kept me safe, although I did find quite some dust in my left ear at the campsite ;-).

Not long afterwards a number of glaciers came into view, finally Skaftafell was getting close! It was now about 7pm, and I knew there was still at least 15km to go (according to that pesky counter). No matter what I did, the glaciers that I knew to be Skaftafell just didn’t come any closer; only in the last kilometre I noticed that the glaciers were actually becoming larger in my view; I was glad just to be there after having ridden 130+km that day. 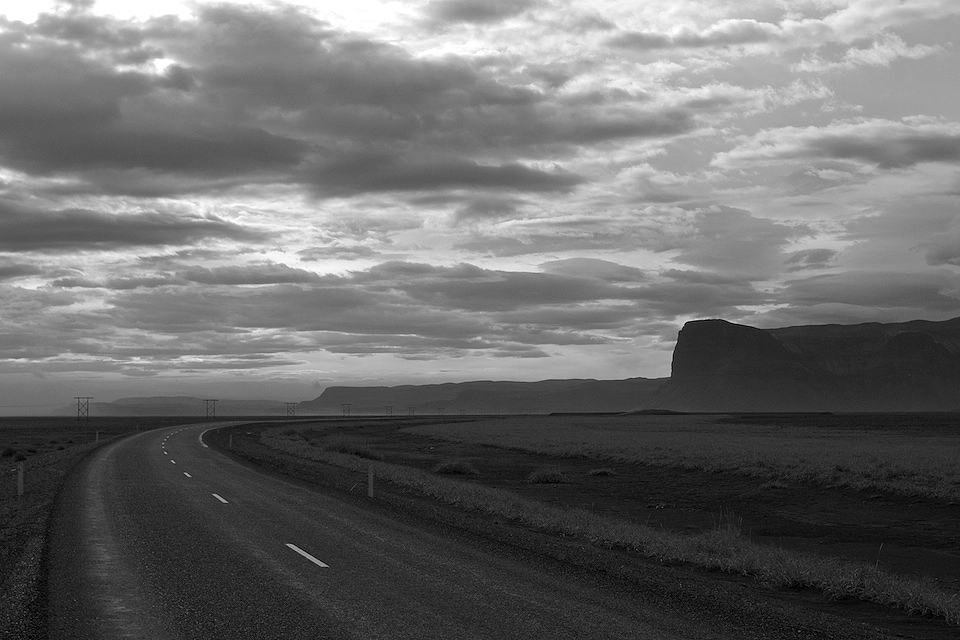 The ring road towards Skaftafell 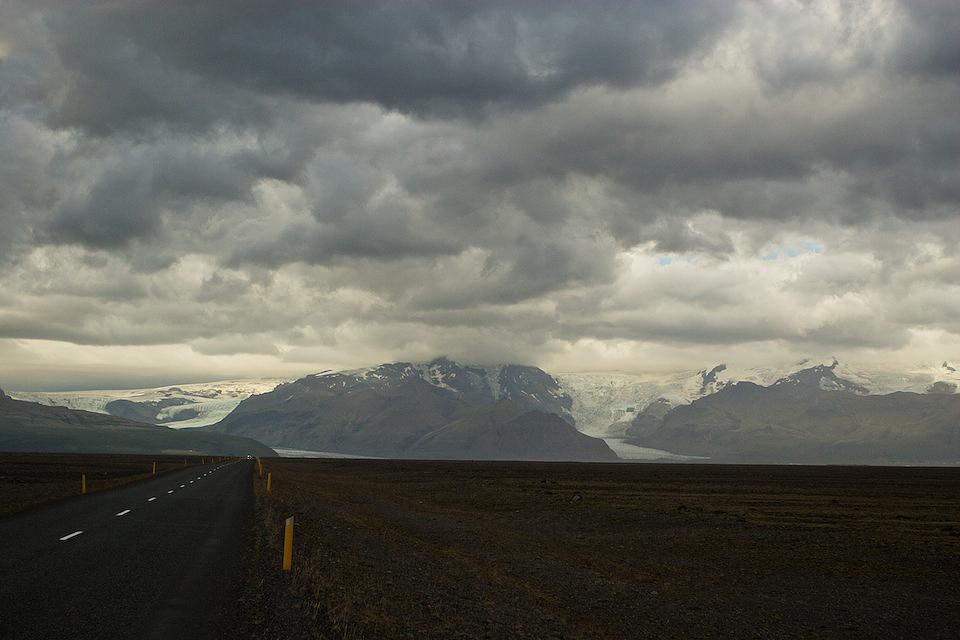 Glaciers in the distance, Skaftafell! 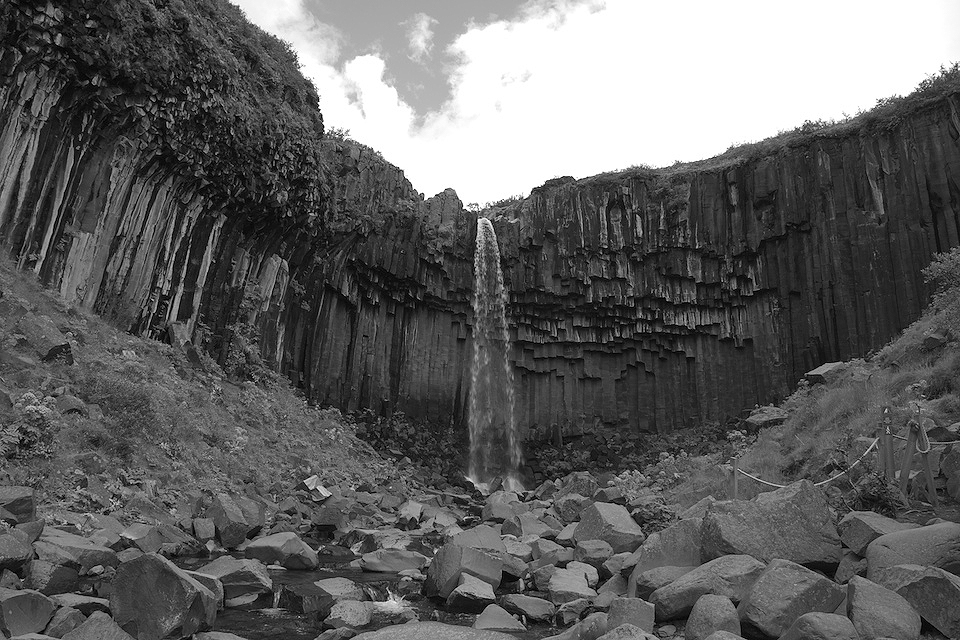 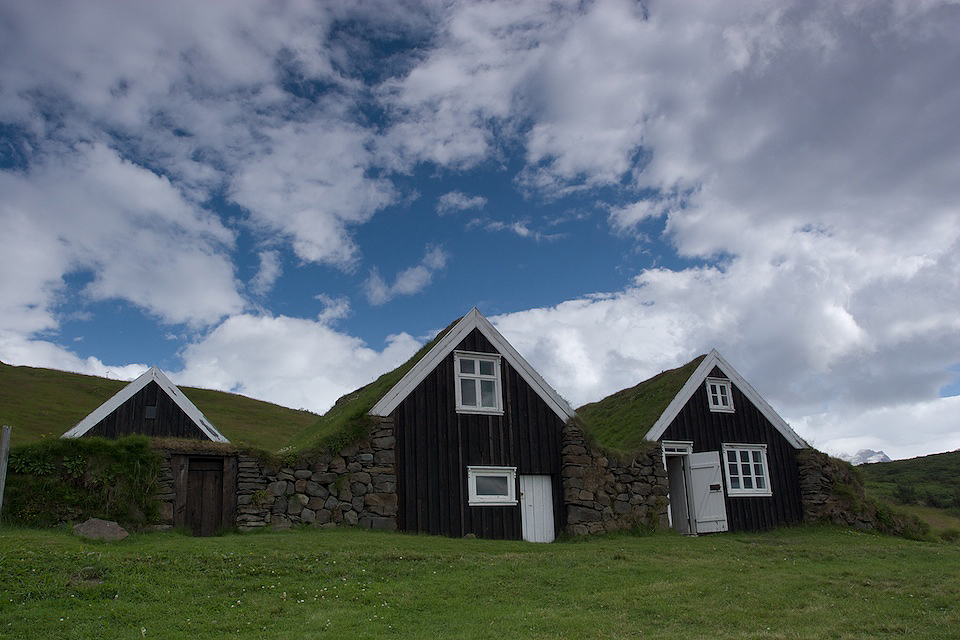 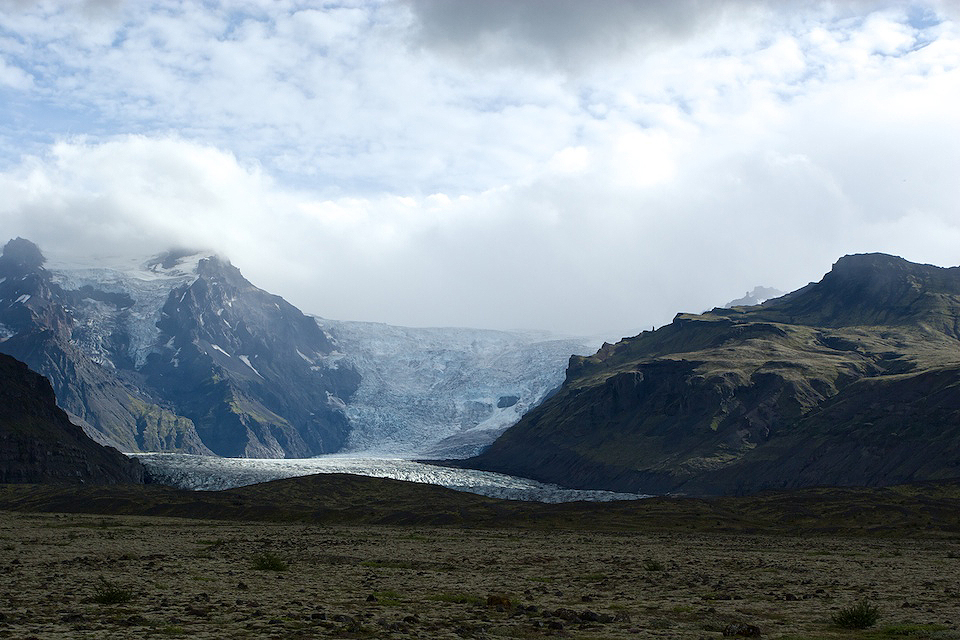 Epic views on a clear morning to one of the glaciers, near Skaftafell

“I just knew it, had gorgeous weather in the last week, and of course today would be miserable.” A quote out of my travel diary for the day I rode from Skaftafell to Jökulsárlon, the glacier lagoon. Soaked to the bone I arrived at lagoon, where I was amazed by the magic of the whole place. Soon my amazement was set aside by the need of something warm and dry; fortunately there was a souvenir shop that served coffee and hot chocolate drinks, and allowed me to sit inside.

Although this location is not really a campground, I had planned to stay the night as the closest campsite was at least another 30km further west (would have taken me just over two hours in this weather). According to the girls behind the counter it would not be a problem for me to pitch my tent somewhere behind the souvenir shop, just to spend the night there.

When the shop closed I spent the rest of the evening sitting outside, in amazement of the magnificent blocks of ice resting there in the lagoon. OK, of course I took quite a load of photos, and I wasn’t the only one. A group of American photographers was visiting Iceland for a photo tour and they wanted to view the lagoon during the ‘blue hour’, which lasted more than an hour here. During the day portions of the ice had a blue colour, but in this light everything was blue.

The next morning I woke up to the engine sound of the large amphibious vehicles, parked not too far from my tent. It was 8:30am, and I had missed the planned sunrise .. ah well, too bad! What I couldn’t miss though was the small layer of fog on the water, behind the blocks of ice. This really gave the lagoon a magical feel, and at the time I would not have been surprised when a magical sea creature should have appeared. 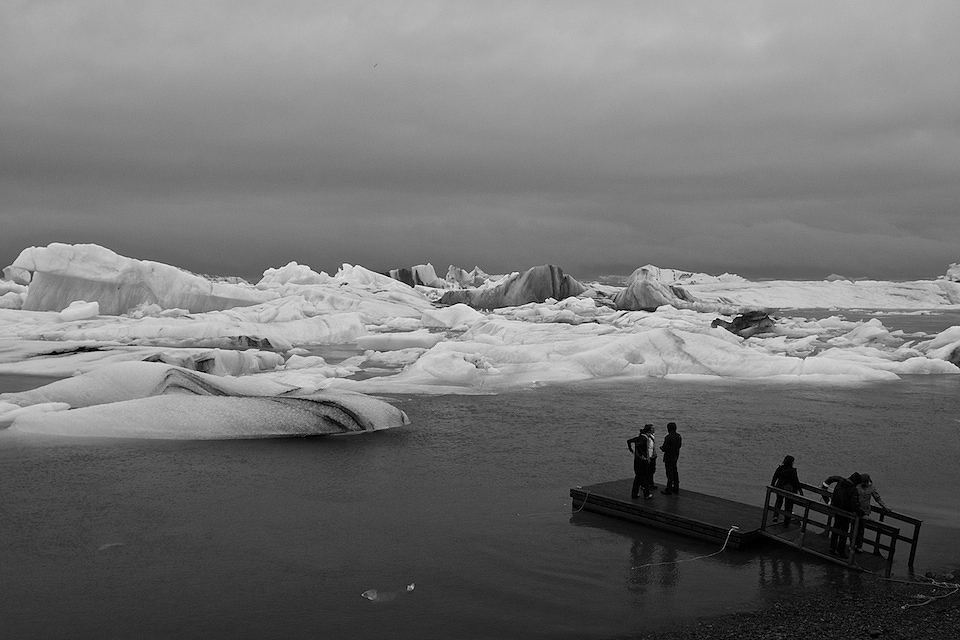 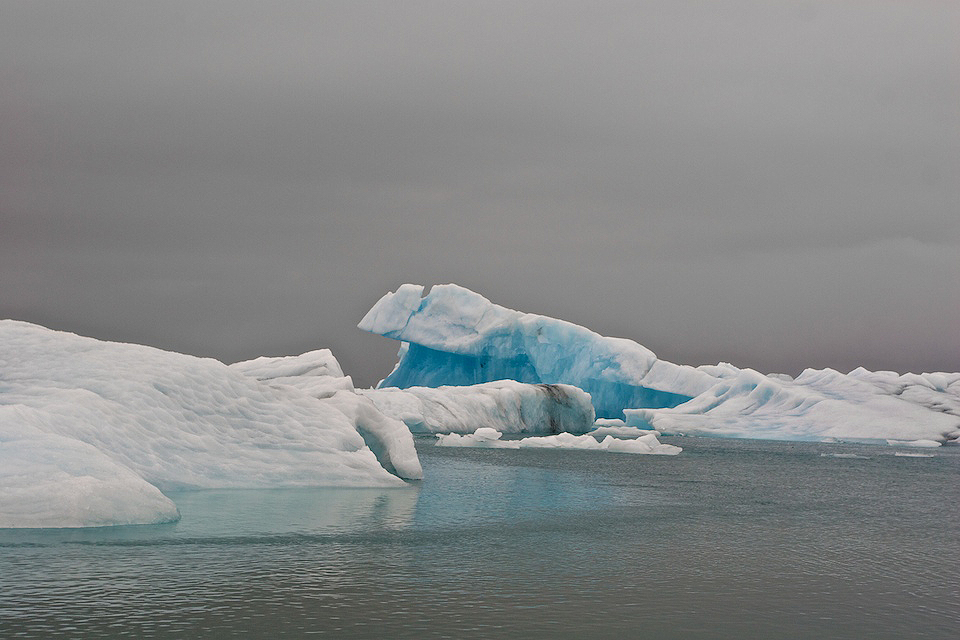 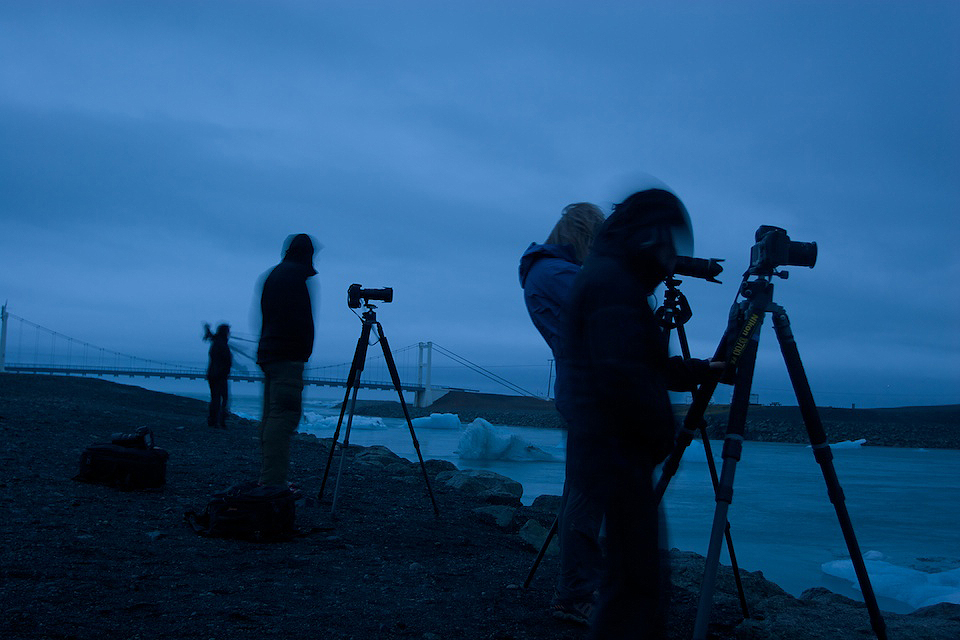 Photographers on the shore during blue hour 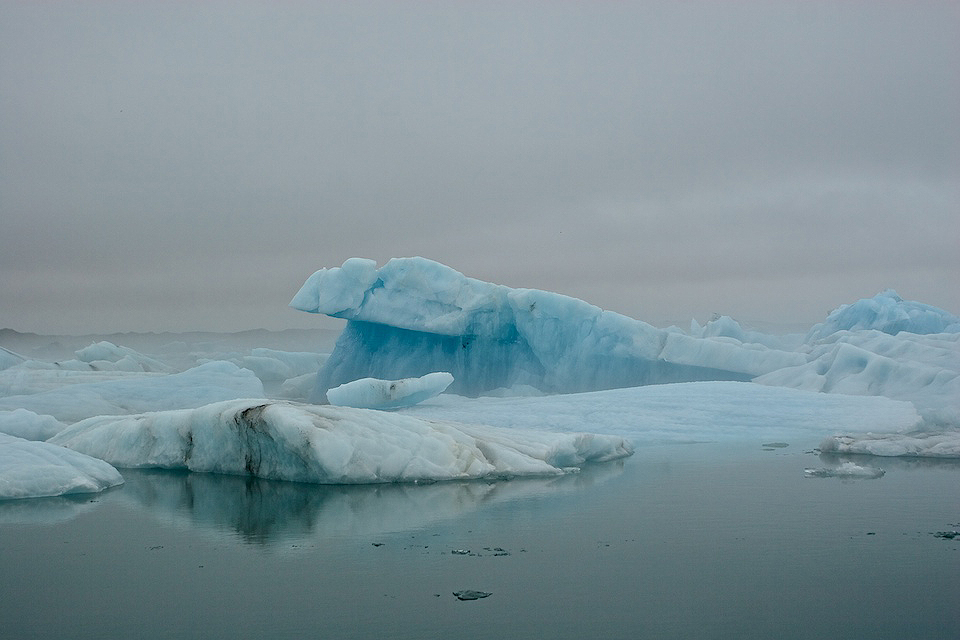 The next morning … a little fog adds for a magical feeling; buy canvas